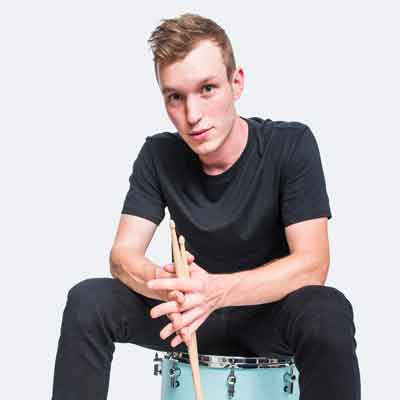 Tobias Urbanczyk grew up in a musical family in Kaiserslautern, Germany. Because his father was also a drummer, Tobias spent many years watching his dad’s classic rock cover band, which instilled in him the love and curiosity of performing.

In 2012, Tobias decided to move to Los Angeles to expand his horizons and attend Musicians Institute. He went on to graduate in September 2013, winning the award for the Outstanding Player. Immediately after his graduation, Tobias started playing for the Folk/Rock band MINER, which led to him recording drums for their second full-length album with well-known producer Phil Ek in Seattle and tour around the country.

For the past 2.5 years, Tobias has been the drummer for Disney star Sabrina Carpenter, which has taken him on two U.S. arena tours, one major European arena tour and a few spots opening for Ariana Grande in Brazil. Some of Tobias’ television appearances include Jimmy Fallon, MTV’s TRL, James Corden, Live with Kelly and Ryan and more. In December 2017 as part of Sabrina Carpenter’s band, Tobias went on the Jingle Ball Tour, opening for some of the major artist such as: Taylor Swift, Backstreet Boys, Charlie Puth, ZEDD and Fall Out Boy, a band who he always admired greatly.