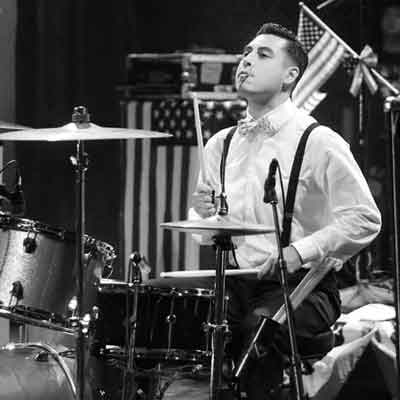 Adam Gomez is a lifelong music fan, who already in his career, has been fortunate enough to play with many of his musical inspirations that he looked up to as a teenager and, now, adult. Adam is a Los Angeles native who graduated from MI in 2009 with an AA in Drum Performance, and it didn’t take long for him to become a steadily working professional drummer. His first tour was with punk band Bloodhook in 2010, where he made the rounds all around Europe, including Germany, Switzerland, France and Spain.

His band, Jahmbi, which he started in high school played a few festivals, including Rockstar Uproar Festival, where they opened for Avenged Sevenfold. Since 2013, he has been the drummer for the legendary punk band, The Dickies, and has been out on headlining tours across all of U.S., and also, England, Ireland, Scotland, Germany, Belgium, Czech Republic, Australia, New Zealand, and they will be touring China this March. In 2015, another MI alum, Ben Seelig, joined the band as lead guitarist. Between that incredible, steady gig with The Dickies, Adam has had the opportunity to fill in for punk legends The Adolescents, D.I., Black Diamond Riders (members of Social Distortion, Cadillac Tramps, Royal Crown Review) and CJ Ramone.

Adam said of his education at MI,

Earning my degree at MI really opened me up as a person, and changed my life. I even developed great friendships with the teaching staff that still exist to this day.