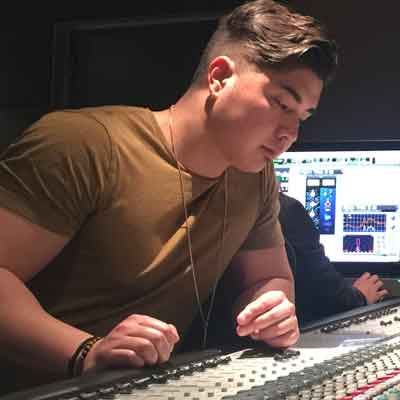 Kevin Cho, aka K.Chozen, is a Canadian music producer based out of Los Angeles. When he was younger, he found a Boyz II Men tape cassette in his brothers Walkman, and after a listen, was quickly hooked on music. Although he’d always loved music, it was not his first career. He previously worked as a civil engineer back home in Canada, but said, “after one year of working at an engineering firm, I quickly understood that that line of work was not going to lead to my fulfillment.” He realized that he was a creative and an artist at heart and believed that those skills would lead to his true success.

He then enrolled at MI to complete an Associate of Art degree in Keyboard Technology and Audio Engineering. In the years since, Kevin has gone on to pave his own track in the business, and can be seen working on projects in the U.S. and overseas. He said of his most valuable lessons he learned at MI:

Highlights of his career have been working with multi Grammy Award winning hip-hop artist Big Sean as arranger and playback for the world-wide Dark Sky Paradise Tour. He has had the privilege of working alongside Kanye West, Ne-Yo, John Legend, Ty Dolla $ign, J.Cole and many more. In addition to his tour work he is an international renowned producer as he is actively gaining commercial success in Asia.

Some highlights of his work is producing the song “Rewind” on K-Pop boy group B.A.P’s seventh studio album “BLUE” and producing several songs on the TV show Idol Producer in China, considered to be the biggest singing competition show in Asia. Earlier this year, he produced music for Universal Music Japan’s artist Naoto Inti Raymi album.

Kevin credits a large portion of his success on his production style being able to cater to many genres and artists. Among many genres, his production of “Como Le Hago” for Latin artist Ezio Oliva and has amassed over 10 million plays on YouTube. This year, he landed his first major U.S. placement with Atlantic Records’ new signee Joe Moses with the song, “I Am Legend,” which Kevin co-wrote.