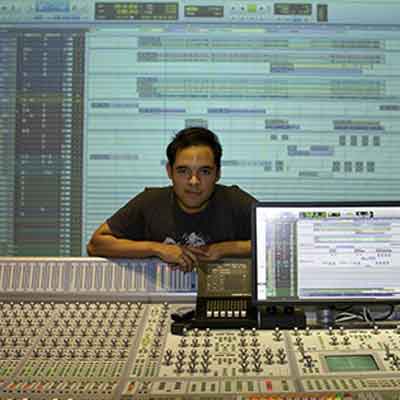 Arturo Lopez studied both Guitar and Audio Engineering at MI, and credits the internship program with helping him break into the music industry. Once he graduated, he worked at LOLA Recording Studios, a private facility in the Hollywood Hills run by Winton Morro of Avalon Designs, one of the most respected studio equipment manufacturers in the business. On a side note, two of the recording consoles at the studio were identical to the ones Arturo trained on at MI, which gave him a tremendous advantage.

As an assistant, Arturo has been part of numerous sessions including film post-production, ADR recording, audio editing, mixing, mastering, and even prototype equipment testing. He has also worked with EDM songwriter/producer/DJ JES, whose songs have been remixed by Tiesto and Kaskade, and diverse collaborators like Kamasi Washington, Claudia Leitte (The Voice Brazil), Elis Paprika, Vanessa Rose, Elaine Da Silva, and MI alumni Jonina Aradottir and Anna Beatriz.

He also performs with his own alternative/progressive rock band Jigsaw Falling, which released its debut EP earlier this year.